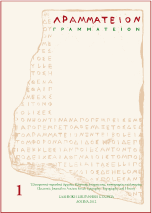 Stella Katsarou, A Cult of Pan and the Nymphs in a cave at Ancient Phokis on Mt. Parnassus

An inscribed bronze tablet with a dedicatory inscription of a woman named Aristo to Pan and the Nymphs was found in a cave in the area of Ancient Phokis, at a high altitude on the NE slope of Mt. Parnassus, together with a considerable number of other votive offerings mainly including terracotta figurines, pottery, and astragaloi, indicating that the place hosted cultic and dedicatory activity during the Classical Period.

The bronze inscribed tablet published here should be dated to the 4th c. B.C., and must have been fixed on a wooden box dedicated by Aristo to Pan and the Nymphs.

The other offerings mostly date from the 5th and 4th c. B.C., and consist of a large assemblage of fragmentary statuettes featuring more than a dozen best preserved heads from typical female peplophoroi, a torso from an ‘Aphrodite’, several parts from male figurines including a figure squatting and carrying a possible round bread, and a headless seated Satyr. Two more naked male statuettes may belong to the end of the 6th c. B.C. Among the 5th c. B.C. record from the site there is an outstanding whole replica of a fig fruit formulated to show its interior opened in three parts and denoted by red paint. Figurines were found together with fragmented black-glazed vessels and lamps of the Classical Period, a miniature kotyle, numerous worked astragaloi, mollusks and faunal remains.

The cave of Pan and the Nymphs was presumably worshipped by shepherds during summer, probably by throwing the votive offerings down the steep interior from the entrance. The site is a new addition to the long list of caves dedicated to Pan and the Nymphs in the Greek mainland, but bears particularly close similarities to two synchronous neighboring upland ritual caves, the Corycian cave on the opposite side of Mt. Parnassus and the cave of Haghia Triada on Mt. Helicon in Boeotia.